Last year, I had the fortune to attend the inaugural Nuit Belge at Marathon Music Works.  Honestly, I really didn’t know what to expect – I had been to multiple Rhizome events in the past and they didn’t sound at like what this event was described as. To clarify, Rhizome is well-known here in town for putting on the best beer events in town, bar none.  The hallmarks of Rhizome events are that they are well-organized, never too crowded (and I can’t stress enough how important this is as most bad beer events fail at these first two), and always have an interesting line-up of products to sample.  And most of the time, Rhizome events are outdoors.  So when this event went up, I’m not sure if anyone knew what to think, as this seemed a much more upscale affair.

And holy schneikies, it absolutely was.  We got there right as the event started up and there was a line out the door to get in.  By the time we had parked and gotten up to the entrance, they had already knocked out the line and my lovely date and I were whisked straight in.

Hooray for beautiful women with terrible tastes in men

The way things were organized was fantastic.  As soon as you entered, they handed you a full-sized Spieglau tulip glass and a little notebook that described not only the menu items, but the beers that paired with them: 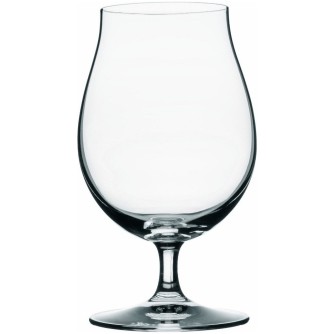 The Champagne glass of… beer glasses.

The ambiance inside was very subdued with mellow lighting.  On stage there was a great jazz combo playing and we quickly met up with some friends and secured a couple of high-top tables.  From there, we ventured out into the fun.

Each restaurant was set up at a table with tons of samples plated up and next to them was a bartender who was pouring for the paired beers.  I’d say about half of them were draft and half were bottled.  I have been really starting to love Belgian beers, and especially sours over the past few years, and this event was like hitting the motherload – there were no duds in the mix.

The nicest thing was that like all Rhizome events, was no matter the station, there was never a line more than 4 or 5 people long and they moved quickly.  From my first sortie into the floor, I’d say that my first favorites were Josephine (smoked ham hock terrine and corned beef cheek with kraut) and the offerings from Thai Essane (Thai papaya salad and their home-made sausage with sticky rice).  And another nice touch was that chefs and owners were there on deck, Chef Andrew Little from Josephine served me his meat delights, and Nina Sayasack tried to personally destroy my mouth with spicy Lao fi-yah.

And while I was out foraging in the room, I happened upon a delightful surprise.  Against one corner was an amazing raw bar from Rudie’s Seafood and Sausage that blew my mind.  And know for certain that I put a hurt on that bar and the gigantic cheese bar from Whole Foods that was adjacent to it, another non-menu delight!

As the evening ended, my vegetarian wife caught up with Andy Little and thanked him for having one of the few non-meat dishes available at the event, the Roasted Cauliflower salad.  To which he replied in delightful deadpan – “I didn’t make anything that was vegetarian”.  She has assumed since Margot Cafe and Bar was next to his station that it was his doing, but in every way he made things that were the opposite of veggie.  And to that I say, thanks Andy. 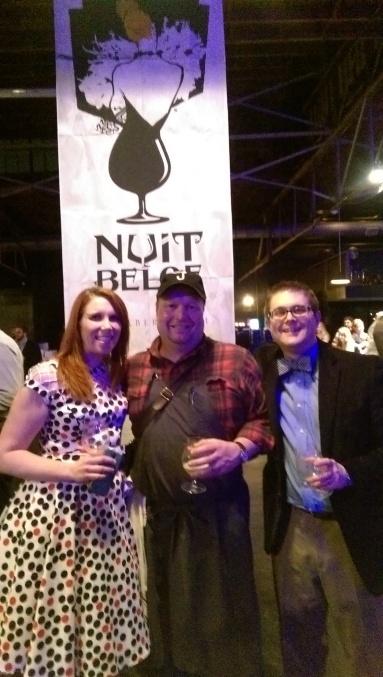 Chef Andy Little – a good sport, and master of meats

My only regret of the evening was my pants.  And by that I mean that there was almost too much to sample – an amazing problem to have.  And admittedly, I *may* have spent a little too much time going back for oysters or terrine.  And maybe I found some delicious beers that I didn’t want to quit on after one sample.  I mean seriously, there should have been a training montage before this event.

Okay, I lied, there was another regret, and again, it was my own personal failing.  As I mentioned, the tasting glasses were full-sized, unlabeled Spieglau crystal tulip glasses and as people were leaving the event, they were just tossing them into the trash like they were Solo cups leftover from a frat party!  In five minutes, I saw hundreds of dollars of crystal dumped in the trash by otherwise ignorant attendees. Shame on me for not liberating a cardboard box and stocking up for years!

Ultimately, this was an amazing event that brought in the best dishes from so many excellent places and paired them with incredible beers.  Bravo to anyone that can so expertly wrangle such great forces and spin such an amazing event out of them.  And you will be guaranteed an amazing evening for certain if you are lucky enough to attend another

And if you are interested, here was the full menu for 2015 – and now you know why you should train for this event…

This entry was posted on January 19, 2016 by Sparky in Uncategorized.