Insensitive Boobery–Fix it With Carbs

Ahh, the Snowpocalypse. Our school district announced that school was closing at 11:00 on January 28, as the snow grew heavier. Having grown up in the Snow Belt, I don’t tend to over-romanticize these events, but on this occasion my typically spartan heart warmed, and I popped a batch of popcorn (using my favorite secret popping medium) and made some super-rich hot chocolate for the kidlets. I had a movie queued up, and I watched anxiously for them to make their way home from the bus stop, kicking up snow with their sneakers and low-cut socks. (The only boots that currently reside in this house have no practical applications, other than looking foxy.) Forty minutes later, the call comes from my daughter’s teacher informing me that their bus couldn’t get out of the school parking lot & that I would have to go and fetch them.

So, I did what many intelligent, practical native WNY‘ers do: I texted the spouse and had him pick up another gallon of milk and a lot of beer. Then, I jumped in the Momvan with my three-year-old and skidded the mile or so to school on the untreated roadways of East Tennessee. Made our way home safely, cozied up, hunkered down, and I braced myself for what I hoped would be a day or two of Minecraft bickering amongst the olders–“Stop killing me!” “She stole diamonds from me!” “He won’t TP me!” “MOOOOOOOOOM!!!” Followed by a flat: “Turn. It. Off.” through gritted teeth from me.

Two things tend to happen when stuck inside with your significant other for four days: pregnancy or divorce fantasies. My husband doesn’t subscribe to the “the wife is always right” philosophy. Which is probably a good thing with regard to a personality such as mine. God only knows the types of mayhem I could generate given that type of carte blanche–we’d likely still be covered up in crushing student loan debt, eating artisan charcuterie while living in a 1976 Ford Econoline, and probably would have been first in line to invest in mortgage-backed securities.

And, as so often happens when people spend too much time together, I did something insensitive and hurt his feelings. And then he called me on it, and then I apologized, but as anyone who’s ever had a friend, a sibling, a wife, or a husband knows, hurt feelings don’t vaporize with an apology–while the Apologizer feels relief and is ready to move on, the Apologee has to decide what to do with those feelings.  So, I did what any 38-year-old, mature, mother of three does–I got pissed off and turned my attention to comfort food. Avoidance–it’s a legitimate marital strategy.

Mashed potatoes–they taste good and are a reasonable stand-in for dealing with one’s feelings. I’ve had countless mashed potato mishaps over the years, but have finally found a way to make them tasty–consistently. When my mother-in-law (who takes great pride in her own mashed potatoes) told me they were “GOOD!”, I knew I was onto something. Take 7-8 medium russet potatoes:

Bigger pieces are better–peel them and cut them into 2 inch pieces (I do this by halving them crosswise, and then quartering the halves):

Put them in a 3-quart saucepan and cover with an inch or so of water. Add 1 1/2 TABLESPOONS of kosher salt:

They’re probably crowded, but it works

Cover and bring to a boil. Once the water is boiling, loosen the cover, reduce heat to medium and cook for 11 minutes or until a knife moves easily through the flesh of one of the larger chunks of potato.  Drain thoroughly, return to pan, and put pan over high heat for 30-45 seconds to dry them out further (shake the pan a couple of times). Add 1/2 cup milk (I don’t bother heating it up–I’m firmly in the “save a dish” camp), 4 tbs butter, and 2 tbs cream cheese. I don’t know the science behind it, but adding a small amount of cream cheese or sour cream to your mashed potatoes magically makes them better when reheated as leftovers. 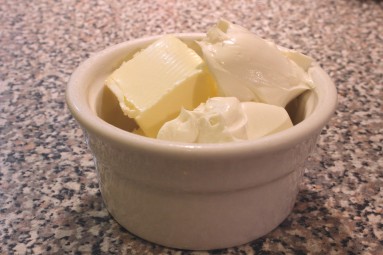 Using your vintage-1999 Procter-Silex hand mixer, mash them up a bit in the pan with the power off, then beat on high using 5-8 second pulses (yes–I timed all of this stuff. I told you–I was avoiding the relationship I had just broken.) It usually takes me 6-10 pulses to get the desired consistency.

I didn’t add any salt to these, and they were perfectly seasoned (I did use salted butter.) But you should taste and adjust the salt to your liking. That is one of the benefits of being the cook–eating half a pan of mashed potatoes to stuff down your rage. 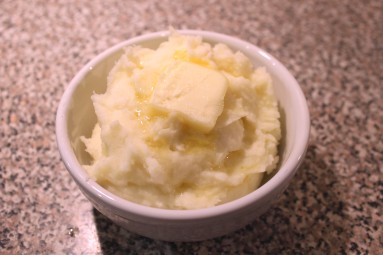 Then, grudgingly give your spouse a bowl of warm, buttery mashed potatoes. Hey–he has feelings to stuff down, too. Make a silly bet, wherein if he loses, he has to retrieve you a beer. Sit next to each other on the davenport without making eye contact, drink a few beers, and wait for the ice-melting mashed potato magic to happen.

*note–while I was ignoring my husband for a few days, my children received some much-deserved attention from me. Balance. It’s all about the balance, people.

Erin is a mostly-SAHM. She hates paying for dishes which she herself can make, and considers creating delightful meals from leftovers a high art.
View all posts by MusicianMama →

This entry was posted on February 3, 2014 by MusicianMama in Generally Bad Advice, What Are We Eating? and tagged avoidance, coping mechanism, marriage, mashed potatoes, minecraft, procter silex, snow days.