Israeli Hospitality – Or the origin of the phrase “You should eat”

I’ve spent the majority of my life in the South.  And one of the many things that the South is known for (aside from overt racism, inbreeding and a lack of shoes) is outstanding hospitality towards our guests.

My mother’s mom, my “Mamaw”, was well known for her hospitality and dinners.  She had a unique culinary background, growing up on a ranch in Texas and spending the rest of her life in Tennessee.  The result of that was that it was just as common for us to have fried chicken and biscuits as it was to have hand-made tamales and enchiladas.  The other guarantee at Mamaw’s was that there would always be a minimum of ten people for a meal, likely more and I’m pretty sure my grandmother could not cook for less than  that many people.  Anyone was welcome, as were their friends, strays were encouraged to join in, and you were probably going to see everyone go home with leftovers.

To put things in perspective, I love to host dinner parties and my wife freaks out if there are more than six people at the table or more than 4 dishes that we are serving for the  entire meal.  I was really curious to see how a typical dinner party would go down in Israel and made sure I stuffed my host’s gift sack full of Southern staples like Goo-Goo Clusters and whiskey.

This particular night we were split up by “interests”.  As it turned out, the group I was put with was going to have a discussion on world beers.  Good call whomever grouped me.  When we arrived at the home of our hosts, I was immediately struck by the cool open floor plan.  This home was made for entertaining.  We were immediately welcomed in and everyone got down to business.  A few things that struck me were how given that even though there was a dinner party, they had already cleaned up the kitchen (which was easy to see because of the open floor plan.  Our hosts were Vered (a teacher) and Ronin (an electrician) and their four kids aged 1-16 plus another teacher friend of Vered’s, Miri.

The spread – note the soda bottles down the center

The food was waiting right there on the kitchen table ready to be served in foil covered steamer trays.  I could learn a thing or two for my next party from these folks!
Once everyone had been seated, they began handing out the side dishes which consisted of the standards, some sort of Israeli salad with tomatoes and cucumbers, hummus, baba ghanoush, some sort of creamy potato salad, guacamole, salads and fresh bread.  When everything hit the table, the hosts encouraged us to tuck in – and after some pussy footing around, we did.

It seemed like they just kept opening trays of amazing food.  Let me walk you through that picture above.  From 12 o’clock clockwise you have:

– Chicken livers and sauce nestled in a bed of mashed potatoes
– A whole roasted chicken that had been broken down
– Artichoke heart cups filled with meatballs and covered in a curry sauce
– White rice
– Some sort of bread pastry filled with shredded beef
– Potatoes au gratin – minus the au gratin
– Chicken schnitzel
– Sautéed chicken breasts
– (center) Green peas with meatballs, because meatballs

There was just so much food!  At first I was wondering, “Do I take a bit of everything?  Stick to one dish?  How the hell does this all work?”  Eventually I just decided to dive in and grab a bit of everything.  It was ALL amazing home-cooked food (though I could never figure out who cooked what, it seemed as if both husband and wife were in on the feast preparation) 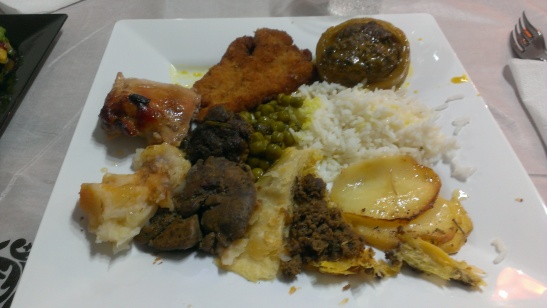 What I went with

One thing I KNEW I couldn’t do was leave without cleaning my plate.  And I won’t lie, I went back for more.  Those stuffed artichokes were too good not to go back for again.  One thing that really surprised me is that the table was festooned with 1.5 liter soda bottles.  It was really clever and convenient, but very different from what you would see in my home,  where it would be more likely to see a pitcher of water or tea.  Plus I think in the US that because of all of the furor around HFCS, you are not likely to see that in most US homes, certainly not at a dinner party at least

And oh yeah, we weren’t even close to being done, because then came the beer tasting.  Our hostess was Naama, who as we found out just happens to brew her own award-winning IPA with Sorachi Ace hops, Klara

I have no idea what this bottle says, but it shore was tasty 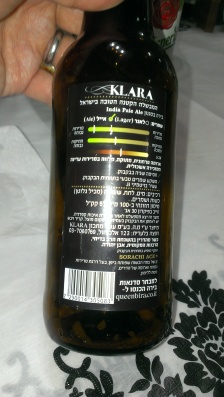 Lots of detail of tastiness

She walked us through several other types of beers, describing the process of how beer is made and differing styles.  Being that I have been on several brewery tours and have friends that brew, I probably was a little too eager when it came to answering questions, but Naama new her stuff and did a great job facilitating her presentation with a smile on her face and a great sense of humor.

THE QUEEN OF ALL BEERS

One pour she had us try at the end was literally Rophenol in a glass, Kasteel Rogue, a high-gravity sweet cherry beer that didn’t come off as cough syrup (and that my wife had a LOT of…) 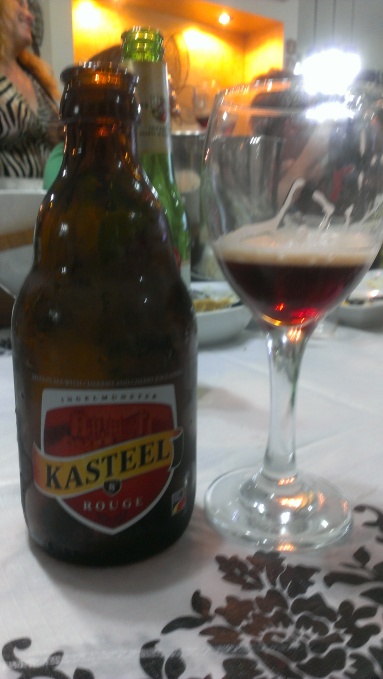 I took advantage of myself after drinking this…

As the evening came to a close, their eldest who was 16, randomly comes up to me and says “Breaking Bad“.  From there, we had a very passionate, though English-limited discussion about Breaking Bad and just what a freaking awesome show it was.  Turns out the dad was also a huge fan of Deadwood, as well, but god save us if there was enough shared English between us to have a meaningful discussion – gosh I wish I knew Hebrew.  But the bottom line is that these folks had excellent taste in addition to being fantastic hosts!

Eventually a wheelbarrow was summoned to carry my bloated form away – no takers on the supply of bourbon I brought along, but this trip isn’t over yet…

This entry was posted on November 6, 2013 by Sparky in What Are We Eating? and tagged Artichoke, beer, hospitality, Israel.