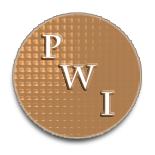 Stuart would not leave me alone.  As the date grew closer and closer, I realized that I had gotten myself into something gigantic – way over my head. ENTER THE KOSHER BBQ-ALYPSE! 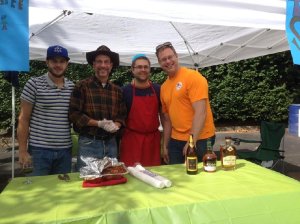 I love to eat BBQ.  Have for years.  Then something happened about 5 years ago.  I got a smoker.  And then, because I live with a damn vegetarian hippie, I realized that I needed to have people eat of my BBQ as making a 7 pound brisket doesn’t quite work for one.  Cue the bbq dinner parties!  And then I started thinking about how sad it was that all of my friends in Nashville that kept kosher didn’t have access, so I bought a bunch of smokers for the synagogue and at least once a year I make a metric ton of BBQ for the people. (By the way, if you ever hear one of the most perfect statements on the beauty of BBQ, listen to this essay by Jason Sheehan, a James-Beard award winning critic who wrote a piece for the old NPR series “In This I Believe” entitled “I Believe in BBQ”) So anyway, back to Stuart.  Wouldn’t leave me alone.  His buddy down in the ATL*  runs a leg of the kosher bbq competition circuit and had been bugging the hell out of him to get a team to come down there. So, we did.

*(Also, have I mentioned that Atlanta absolutely sucks?  Never before outside of LA has there ever been a more nightmarish sprawl of concrete and bad planning.  I swear to god, I’ve never seen so many neighborhoods without sidewalks – hell, it is like they designed the place to kill pedestrians, like Death Race 2000 or something.  Who could stomach living in a place where it takes an hour to go 10 miles by car?)

We got down to the synagogue around 6:10PM local time.  There was much scurrying around in big hall as everyone went to select their meats and grab basic ingredients.  Everyone was pretty nice, except for this one lady who was there from a catering service; she had drafted her employees to participate and she was being a pain in the ass.  As well, there were six eyes on the range to use if you needed to cook anything, and it was next to impossible to use them given how cramped the space was.  At the same time that we were prepping, the local sisterhood was preparing dessert which made for even more tight quarters.  I dropped off my metal products to be kashered and Stuart and I raced around like chickens with our heads cut off trying to get everything done as quickly as possible.  It probably would have been a good idea to have brought another person for this part, but the bummer was that since the prep was Thursday night and the event didn’t start until Saturday night, there weren’t many takers.  We cracked open the first bottle of Weller (WHICH WAS $11 ?1?) around 7PM, and poured freely for all who would drink – certainly took the edge off.  Both of the Mashgiachs loved it – that’s how I knew they were OK guys.  We finished up eventually and I wanted to head to Holeman and Finch, but instead we ended up going to a place called “Taco Mac”… which sounds exactly like it was.

Saturday around 8PM we got started and began to set up our booths.  Now here’s where our first mistake happened.  Some of the guys at this thing were wearing costumes, there were booths with frigging smoke machines, pyrotechnics, and light shows (almost).  I really couldn’t have given two shits about that – I was there to make delicious BBQ.  That definitely counted against us 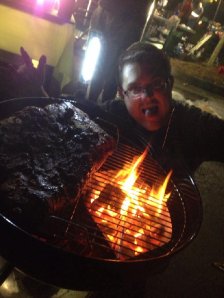 The grills got lit up around midnight and we had a pretty nice setup going.  Stuart and I had brought along quite a bit of tasty brown liquor, including more Weller and some Whistlepig Rye that I had picked up.  Trent, being the god of craft beers, had brought a chest chock full of big tasty 22oz. oat sodas.  I had a stash of cigars, but I wasn’t feeling the best, so I didn’t hit them yet. 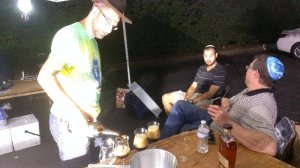 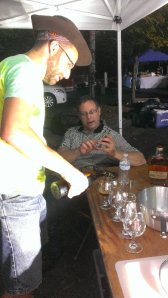 It puts the beer into the glass 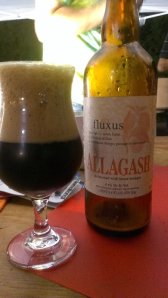 Shortly thereafter, tragedy struck – seems something that I had ingested at the Georgia Aquarium didn’t quite sit well with me and I began regular pilgrimages back to the restroom, which made enjoying some of my favorite things, whiskey, beer, cigars and BBQ quite challenging.  As a matter of fact, this was easily the longest night of my life, and while my team-mates cycled in and out with a snooze here or there, I just kept feeling worse and worse.  Thank goodness for the guys from “The Three Brisketeers” – they saved my life several times that evening with the amazing coffee they had brewed up; Turkish-style with cardamom.  By the morning, not only was I punchy and delirious, I felt pretty raw.  Stuart forced me to go back and take a shower, and on the walk back to the hotel next door, I blew chunks everywhere.  I shit you not, I regurgitated the sandwich from the aquarium like it had been perfectly preserved in my stomach for 18 hours. 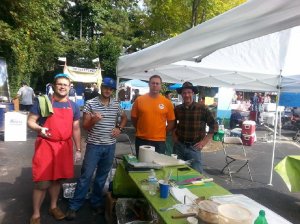 Better than a mugshot

By the time I had gotten back, I felt much better, you know, considering I had been awake for 29 hours by that point, but the crunch was on for us – we were presenting soon.  This is also where we screwed up.  We had been warned over and over that the judges were looking at presentation; they even showed us pictures.  We clearly did not follow protocol.

The other thing that sucked ass was that we easily had the shittiest position in the set-up.  We were at the tail end of the lane and assholes kept walking through our damn tent and pit.  I watched an 8 or 10 year old boy walk barefoot through my pit area; the dumb bastard had to walk over the barricade we had made out of trashbags and tape.  Who the hell lets their kid walk barefoot through a parking lot with hot coals?  I know it is Georgia and all, but seriously! And people got all pissy when we asked them to please not walk through our booth.  This less-than-advantageous position also made it so that when people finally worked their way around to us, their limited tasting cards had already been punched, so they couldn’t sample our food.

So, we decided to just give it the hell away.  And people loved it apparently.  I didn’t get to hear as much as I was on the back end, but the gang running the front end kept saying how much people were raving about our food.  Plus we were pouring free beer and whiskey samples the whole time.  I will always miss that bottle of rye.

How did it all end up?  We lost the shit out of everything.  Some local kids got the so-called “People’s Choice Award” and I think the only thing we weren’t dead-ass last on was our team name.   I couldn’t wait to get the fuck out of there at the end, and brothers and sisters, there is nothing better than sleeping after being awake after 38 hours.

Now look.  I know I make delicious food.  That topic is not up for debate.  But I will say this is my first and last competitive kosher BBQ event – I’ll stick to feeding people great food without the hassle.  And with more pork products…. 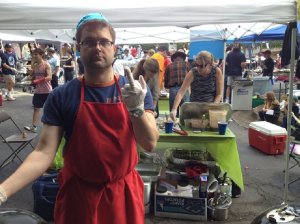 I feel this picture best captures my experience at the event