A Visit to The French Laundry Part 1 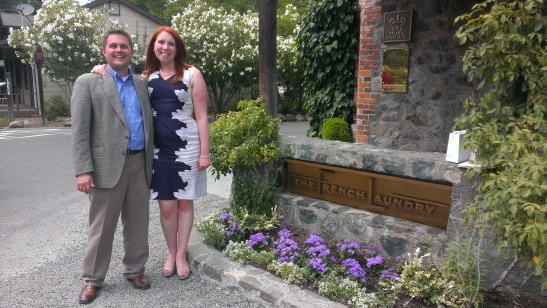 Shortly before they chased us away…

In May of 2013, my wife and I were lucky enough to get to celebrate our 10th anniversary in San Francisco and Napa Valley.

I’ve been a big fan of Thomas Keller for quite some time; my first experience at one of his restaurants was at the branch of Bouchon in Las Vegas.  Before that, I had been to plenty of amazing restaurants around the country and world, but there was something about that experience that really resonated with me and I began reading up on him.

Yes, I got a lock of his hair

Some things that I love about Keller is that for the most part, he has managed to avoid the “celebrity chef” nightmare that most of the other people that would fit that category fall into.  The guy just strikes me as a workaholic, someone who truly cares about his name and product, and a guy who just doesn’t put on airs.  I read a great story the other day talking about how he loathes chefs that think that they know better than the diner, who won’t allow substitutions or omit ingredients (COUGH ARNOLD MYINT, WORST CHEF EVER COUGH).  He got really testy with the people interviewing him, saying “If someone came into French Laundry and wanted a grilled cheese sandwich, we would make them a grilled cheese sandwich – it is not up to us to decide what makes someone happy”.  He then went on to talk about how a tasting menu is designed to take stress off of the patron, that it is there to create a great meal experience, not to dictate what should or should not be eaten.

He’s also a big proponent of food and how it calls back memories.  He will talk about the food that made him feel secure and loved as he was growing up as a child with a single mother and it is the simple comfort fare that you will find at Ad Hoc in Yountville; fried chicken, beef brisket, chicken and dumplings, a strip steak with all of the fixin’s, mashed potatoes, you name it.  And honestly, if Ad Hoc was within distance of my home, I would easily eat there once a week at a minimum (and probably weigh 500 pounds).

So, back to our anniversary.  I had been planning what we should do for several years, even though my wife had no idea.  That’s just kind of how I am.  When I went to Hawaii in high school, we only visited Maui for a day and I knew then that I wanted to propose to my wife there someday.  And 8 years later I did.  And while I wanted to make sure that my lovely better half got to do a ton of romantic and fun things on this trip, there was one thing that I really wanted – a meal at French Laundry.

So, more than six months out, I began planning our trip.  Flights, lodging, researching places to go to, things to do, wineries, restaurants; you name it.  And while I had heard that it was tough to get into French Laundry and reservations needed to be made a year in advance, after a half-assed cursory glance, I found out that they only took reservations two months out.  Simple!  I’ve got this; besides, they used Open Table.  I plunked down a reminder in my Outlook calendar so I could get a reservation two months before our anniversary date.

The day came and I set my alarm for 5 minutes before midnight on a Sunday evening.  I woke up and my phone was at the ready.  Nothing.  Then I realized it was Midnight Pacific Time when the reservations opened.  No worries, 1:55 AM it was.  The alarm went off again, and I was ready.  “No reservations were available during this time”.  I began to panic and ran downstairs to my office.  It was at that point I began to read up online about what it *really* took to get into French Laundry.  Turns out that only two tables a day were released via OpenTable.  One at 5:30 and one at 9:15.  So, that was pretty much an impossibility.  Next up were all of the sites that had FAQs on how to get reservations.  It was CRAZY hard.  A phone line opened up at 10 AM PST and immediately becomes jammed until they book up.  Other options were using and abusing privileges like high-end AMEX cards.  But still, a slim chance.  In the comments sections were tons of sotries of schlubs who went to Napa for big anniversaries who had tried desperately to get in but had failed miserably.  Would this be me? I was crestfallen. 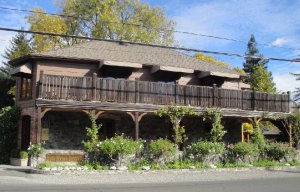 No French Laundry for you

I went to bed frazzled and the next m0rning I went back to work.  I had my second wind.  At 11:50 AM, I had my office phone and cell phone at the ready.  I even had my wife prepped to call on her end.  The dialing began.  Over and over and over and over did I dial.  No hold music, no “Your phone call is important to us, etc etc”, just a straight-up old-school busy signal.  The circuits were JAMMED.  Several times no sound happened and my spirits were raised – nothing.  And nothing on Abby’s end.  I am certain that at some point between rapidly dialing two phones that I screwed up and ended up hanging up when I had gotten through.  At around 12:35 PM, I had pretty much begun to give up hope and then… I MADE IT THROUGH!  I was SO happy to get a hold music sound!  And then… A REAL, LIVE PERSON!  Turns out I had gotten THE LAST reservation of the day, for 11 AM at lunch.  I asked to be put on a wait list for dinner, but my thankfulness was palpable!  I called the wife and was floored!

One comment on “A Visit to The French Laundry Part 1”